BMC was created by the formal merger of Boston City Hospital (BCH), which was the first municipal hospital in the United States, and Boston University Medical Center Hospital (BUMCH) in July 1996 which was sponsored at founding by the Methodists and then by Boston University. At Boston Medical Center, all are welcome and treated equally. The best and brightest physicians, representing virtually every medical specialty, choose to work here for the opportunity to make a difference in their community and beyond. Unwavering in its commitment to the community, BMC is a private, not-for-profit, 567-bed, academic medical center located in Boston's historic South End. The primary teaching affiliate for Boston University School of Medicine, BMC is the largest safety net hospital and busiest trauma and emergency services center in New England.

Seeing more than more than one million patient visits a year in over 70 medical specialties and subspecialties, BMC physicians are leaders in their fields with the most advanced medical technology at their fingertips and working alongside a highly-skilled nursing and professional staff. No matter who you meet at BMC – from the x-ray technologist to the critical care nurse, the admissions staff to the chief of surgery – everyone is committed to providing quality care to every patient and family member with respect, warmth and compassion.

The history of the Department of Surgery at BU dates back to 1946, when Dr. Reginald H. Smithwick was recruited from Massachusetts General Hospital to serve as Surgeon-in-Chief. With him, he brought a team of talented surgeons, including Dr. Jesse Thompson, a pioneer in vascular surgery; Dr. Douglas Farmer, a gastrointestinal surgeon; Dr. Chester Howe, a specialist in surgical infectious disease; and Dr. George Whitelaw, a noted educator and general surgeon. Smithwick served as chairman for nearly 20 years, and was followed by Dr. Richard Egdahl who was recruited from the Medical College of Virginia in 1963. Dr. Egdahl continued to pioneer the clinical research capabilities, and later retired in 1973. In 1997, Dr. Egdahl was named the first Alexander Graham Bell Professor of Entrepreneurial Medicine at BUSM.

In March 2017, the Boston Medical Center announced that it had received a $25 million gift, the largest in its history, from John Grayken and his wife, Eilene. The donation will go to the creation of the Grayken Center for Addiction Medicine at BMC. Michael Botticelli was named its director. 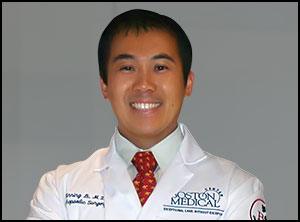 Have a Question?
Practice Locations